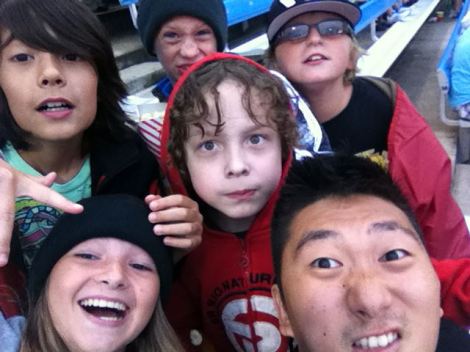 (61Syx Teknique hangin out in the bleachers before the game)

61Syx Teknique joined many other High School Dance Teams, and the One and Only Jimmy Superfly Snuka at the Grand Rapids Whitecaps Baseball Game tonight!

After 6 Innings of impressive baseball, the Crew took the Dugouts and performed between the 6th and 7th inning as well as right after the 7th inning stretch! It was hands down the biggest performance for the kids of 61Syx Teknique dancing in front of well over 2000 fans!!!! The kids were such an inspiration that we couldn’t help but notice other kids trying to break in the aisle ways after the performances!

Had a blast at the game tonight! Thanks again to Brian, and Meryl for hooking us up with the show! Hopefully we’ll be back again next year!

Register for Classes or Log in to your Parent Portal